Located on the Arabian Gulf coast, the State of Qatar is a gateway between the East and West. The country is at the crossroads of contrasting economies, cultures, and natural environments and is part of a region which has attracted visitors for thousands of years. Today, 21st century Qatar is a spectacle to behold. Massive urban development, large-scale investment projects, and generous government spending has turned this tiny peninsular nation into one of the most dynamic places in the world and one of the wealthiest countries in terms of share of GDP per capita. In 2011, Qatar’s economy became the fastest growing market in the world, registering an impressive real GDP growth rate of 18.7 percent.

Although the oil and gas industry has been the cornerstone of modern Qatar’s economy since the discovery of reserves in the 1940s, the country is presently leaving no stone unturned to diversify its economic base and to transition itself from being a carbon-based economy to being a knowledge-based one.

As a result of this positive economic expansion, Qatar has seen an influx of foreign workers from many countries around the world. Some 80 percent of the nation’s population now comprises members of the expatriate community, and these global talents are helping advance various sectors and industries within the country, including oil and gas, real estate, finance, education, science and research, and sports and leisure.

The advent of economic prosperity in the last 70 years also stimulated the development of Qatar’s modern infrastructure, with many of the current roads, telecommunication links, educational facilities, hospitals, cultural centers, and science and technology research institutions being built just in the last decade. A testament to this explosive growth is the emergence of a dazzling new skyline in the capital city of Doha, an awe-inspiring collection of buildings that seem to have risen out of the sands like a mirage in the desert. The city’s infrastructure is a veritable tour de force that speaks volumes about the Qatari ambition.

The country is also recognized as a leading destination in the Gulf region for meetings, exhibitions, and conferences — a business-oriented location that also puts emphasis on leisure activities. This affords travelers the chance to conduct their business while enjoying the host country’s local attractions.

It can be said that even though Qatar has taken quantum leaps forward into modernity, visitors continue to love it for its charming Islamic culture and for its laid-back atmosphere. Its countryside still possesses that bucolic charm for which many historic places in the Arabian Peninsula is known. The country has successfully preserved and highlighted its authentic heritage and rich past, making it a perfect destination for those who want to experience genuine Middle Eastern culture and hospitality.

Indeed, beneath the country’s fabulous wealth lies its true treasure: its people. Qatar is a place where people see things differently, where citizens embrace new ideas, and visitors are welcomed as honoured guests and dear friends.

SOME FACTS ABOUT QATAR 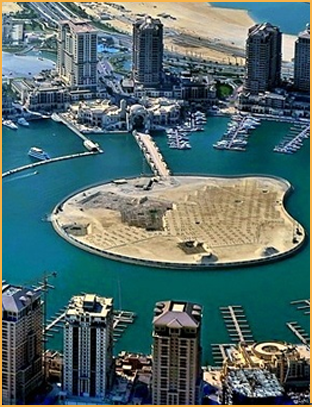 Land area
11,437 km2
Capital City
Doha
Population
1,853,000 (2010). About 78 percent of inhabitants (1,450,000) live in Doha.
Official Language
Arabic is the official language in Qatar, and English is widely spoken.
Religion
Islam is the official religion of the country, and the Shariah (Islamic law) is a main source of its legislation.
Economy
Real GDP growth rate: 18.7 percent (2011). Qatar’s economic growth was the fastest in the world in 2011.
GDP per capita (PPP):
US$109,000. Qatar’s GDP share per head was the highest in the world in 2012.
Major towns
Doha, Al Wakrah, Al Khor, Dukhan, Al Shamal, Mesaieed, and Ras Laffan
Currency
The official currency is the Qatari Riyal (QR), which is divided into 100 Dirhams.
The exchange parity has been set at the fixed rate of USD 1=QR 3.64.

Eid al-Fitr (date varies): A religious festival that marks the end of the holy season of Ramadan

National Day (December 18): Celebrated in commemoration of Sheikh Jasim bin Mohamed Al Thani,
the founder of the State of Qatar

Fridays and Saturdays are the weekend holidays 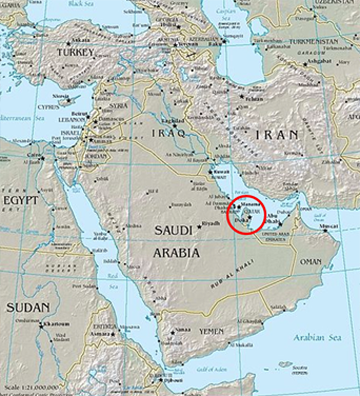